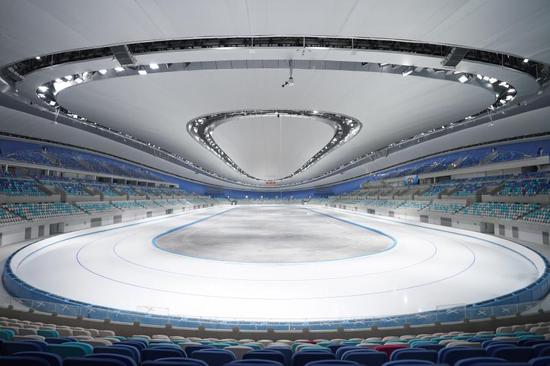 The National Speed Skating Oval, locally known as the "Ice Ribbon," a key venue for the Beijing 2022 Winter Olympics, is the world's first Winter Olympic venue that uses carbon dioxide for ice-making, which is currently the most environmentally friendly ice-making technology, with near-zero carbon emissions and improved efficiency. (Xinhua/Ju Huanzong)

The organizers of the Beijing 2022 Winter Olympics and Paralympics (BOCOG) held a workshop on Friday in an effort to honor their commitment of carbon neutralization for the Games.

Attended by experts and scholars in the field of ecology and climate change, the meeting discussed issues including carbon emission accounting methods, carbon emission reduction measures and effectiveness, and the carbon neutralization work path for Beijing 2022.

Achieving carbon neutrality has been an essential commitment in the bid for the 2022 Winter Games. In 2019, the BOCOG issued the "Carbon Management Plan for the Olympic and Paralympic Winter Games Beijing 2022" (hereinafter referred to as "Carbon Management Plan"), proposing 18 carbon emission reduction measures in four aspects - low-carbon energy, low-carbon venues, low-carbon transportation and BOCOG's initiative. Additional carbon compensation measures have also been proposed.

In accordance with the "Carbon Management Plan", all parties have actively implemented carbon emission reduction measures by making full use of Beijing 2008's legacy, transforming the existing venues instead of building new ones.

Well-planned construction sites for the Beijing Winter Olympic Park, the Shougang Big Air platform, and the National Speed Skating Oval effectively saved space and reduced the waste caused by demolition. An ultra-low energy consumption pilot program covered an area of nearly 50,000 square meters, including parts of the Olympic Village in both the Beijing and Yanqing competition zones and the Wukesong Ice Sports Center.

For the first time in Olympic history, carbon dioxide was used as refrigerants in ice-making in four venues, which greatly reduces damage to the ozone layer as well as energy consumption. In addition, a large amount of high-quality waste heat generated during the ice-making process can be recycled to meet other energy needs.

Relying on the Zhangjiakou-Beijing flexible DC power grid project and cross-regional green power trading mechanism, Beijing 2022 will realize full coverage of the urban green power grid at all venues for the first time in Olympic history.

During the Games, spectators will be encouraged to travel by public transport between the Beijing, Yanqing, and Zhangjiakou competition zones. Combined with the development advantages of new energy vehicles and renewable energy in Beijing and neighboring Hebei Province, new energy will be used on passenger vehicles.

Meanwhile, carbon compensation measures have seen positive progress too. Beijing and Zhangjiakou governments have made great efforts in plain afforestation by authorizing professional institutions to monitor and certify forest carbon sequestration. By the end of 2021, the carbon sequestration will be donated to BOCOG to neutralize greenhouse gas emissions.

In addition, BOCOG released a WeChat mini program in 2020 to encourage and guide the public to practice a green and low-carbon lifestyle, allowing users to record their low-carbon behaviors through digital tools.