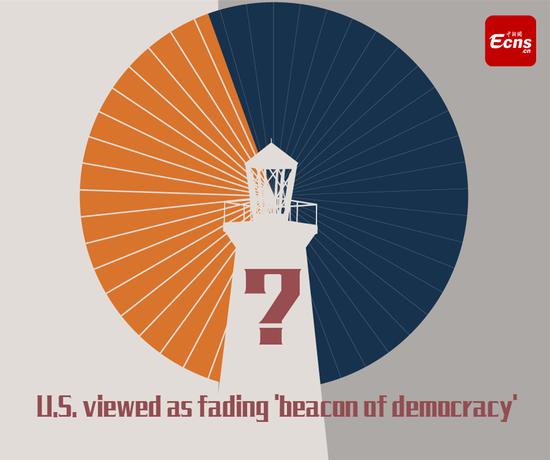 Nearly half (44 percent) of people around the world are concerned that the U.S. threatens democracy in their country, according to a survey. (Picture by Yao Lan)

(ECNS) -- A recent survey by Alliance of Democracies found that 45 percent of Europeans thought the U.S. has a negative rather than positive impact on democracy (45 percent negative vs 38 percent positive). Moreover, nearly half (44 percent) of people around the world are concerned that the U.S. threatens democracy in their country.

U.S. democracy did little to benefit its people, considering 579,000 Americans died from COVID-19, hate crimes surged, and gun-related cases resulted in over 10,000 deaths so far this year. Besides, the U.S. has frequently achieved its strategic goals via military threats, political isolation, economic sanctions, and technological blockade. The Mexican President on Friday publicly accused the U.S. government of violating Mexico's sovereignty. Even U.S. National Security Advisor Jake Sullivan has said the last U.S. administration's Iran policy was "all coercion and no diplomacy." This shows America's interference and disruption of democracy in other countries.

Data and facts are undermining people's confidence in "American-style democracy" worldwide. Some may even say the so-called "beacon of democracy" has become more of a "hypocrite" than a "guardian."